In the lead up to Halloween there are many new movies and television that make perfect costume inspiration. Disney’s Descendants is one such television movie from the Disney channel that has arrived just in time for Halloween and I predict they’ll be popular this year amongst children and for many years to come.

Disney’s Descendants first premièred on the Disney Channel on July 31st 2015 to high viewing figures in the millions and positive reviews from both fans and critics alike. It stars well known child actors and actresses from other Disney shows as the children of different well known Disney villains.

I believe Disney’s Descendants costumes will be hot this Halloween and for good reason, over 16 millions people have already viewed it if you count live and DVR playback viewing figures. It’s been such a hit that Disney has announced an animated spin off for September 2015 which will only aid the character’s popularity. There are already a few official costume available however these are only for the female leads as no male outfits are available, bad news if your son is a fan of the movie. I think it’s a shame on Disney however check back often to see if they become available in future.

Here is Evie’s get up featuring official wig and deluxe Isle of Lost costume too.

Next up we have Mal also known as Maleficent’s daughter. Here’s her outfit which includes: top, pants, jacket and glovette. Only items not included are footwear and wig. Pair it with the wig above and sensible footwear and your child is ready to go. 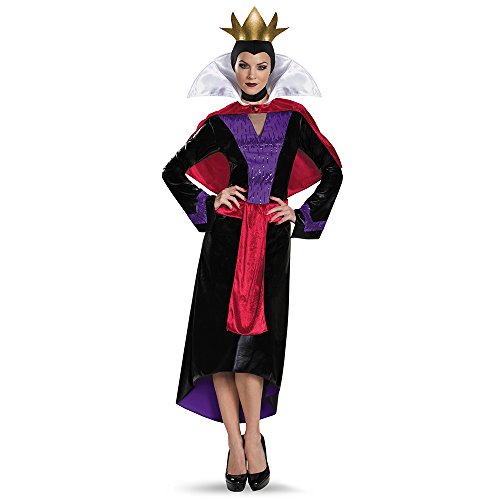 The Evil Queen features in Disney Descendants and is the perfect get up for adults accompanying their children this year to fit with the theme, this outfit set comes with: dress with collar, hood and crown. Simply add your own heels for an elegant finish.

Disney’s newest television movie isn’t just for children and teenagers, there’s also appeal for adults in the form of Maleficent and the Evil Queen, both of which make perfect costume choices this year and people’ll recognize who you are even if they haven’t seen the film yet.

Maleficent’s outfit comes with everything you’ll need including purple dress with high collar, belt and headpiece. Boots are not included but not hard to find at local thrift stores or in your existing closet.

At the time of writing there are no official Carlos costumes or for any of the male leads which is a great shame on Disney’s part as you’d expect them to cater for both boys and girls. However that doesn’t mean with a little creativity you can’t create his outfit yourself.

Hair is easy, simple apply grey dye or spray to your child’s hair, you may want to start with a base of white so the grey shows up better especially if their hair is darker to begin with. Then move onto constructing his attire, start with a red leather jacket as your base and later a white and black tank top. Add white and black quarter length pants aswell as red spiked boots and it’s completed.

The Plot: Good Vs Evil

As a Disney movie there are certain themes such as good versus evil that prevail throughout, in fact this movie is based on the idea of nature and nurture. Does having an evil villain parent rub off on the child or can they find their own moral compass pointing in the right direction.

All villains are forced to live in an island surrounded by a magic barrier. Fast forward to the present day and we have Prince Ben also known as Belle and Beast’s son taking his place on the throne. As a first proclamation he gives the children of all villains imprisoned on the island a chance to redeem themselves.

What Ben doesn’t know is each child has been under pressure from their villainous parents to steal the Fairy Godmother’s wand. Will they find their own way in the world or will the words of their parents influence them enough to do bad.