Chucky is a well know serial killer who lives inside the body of a doll, and has become one of the most well known horror villains alongside Freddy Krueger, Mike Myers, Ghostface from Scream and Leatherface.

Today we’ll be looking at how to create your own DIY Chucky costume including everything you’ll need: overalls, wig, weapons, and scary cracked doll makeup. Aswell as premade outfits for those in a rush.

This is ideal for Halloween when Child’s Play is bound to rerun on the numerous movie television channels. The look we’ll be focusing on is after the third film when he’s dropped into a giant fan which slices him into pieces consequently creating his iconic spooky stitched-up look. 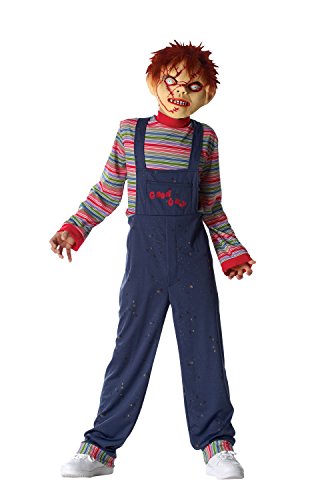 First up here are Chucky outfits for men and boys, it’s common to see father and son dressed in the same outfit during Halloween so these’ll work a treat for that.

Both sets include everything you’ll need including: blood splattered overalls, shirt and mask with hair. Add appropriate footwear and you’re ready to trick or treat. 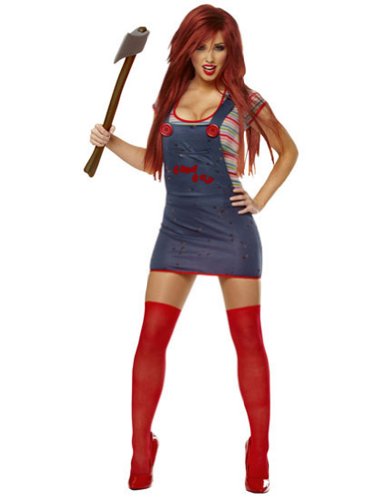 Don’t want to dress as Chucky’s Bride? Don’t worry there’s an alternative in the form of these sexy Child’s Play outfits modelled after the possessed doll.

Includes: blood splattered overalls, skirt and shirt. Add a pair of red heels and a toy axe to complete the look. Use a mask for his stitched-up face or use the makeup tutorial below. 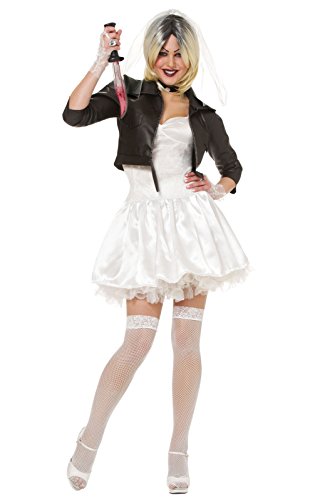 We’re introduced to the Bride of Chucky in the fourth movie (Child’s Play 4), here we see Chucky with his new stitched look and we find out he’s found himself a wife to be.

Her outfit is perfect for couples at Halloween or cosplay and includes: black faux leather jacket, bridal dress, gloves and black chocker with rhinestones.

Check out the local thrift store for supplies before beginning:

Assemble all parts and add the makeup tutorial below to complete your look. Don’t forget to add a toy axe, add fake blood for a menacing touch.

Chucky’s face is super important to his overall look especially after the third movie where he has permanent scars on his face stitched up with thread. You can either opt for a mask or do it yourself with makeup using this quick four minute video as a guide.

There you have it, a completed Child’s Play costume perfect for Halloween! Take your girlfriend or wife along as your Bride and you’re all set for a fantastic October 31st.