Freddy Krueger is an undisputed horror movie/Halloween icon, and is known by his burned skin and sharp claws. He’s the main protagonist from Nightmare of Elm Street series of movies, stalking his child victims in their dreams waiting for the perfect time to pounce and kill.

When Freddy is caught for his crimes initially it looks like his victims may finally get the justice they deserve, only he escapes thanks to a legal technicality. He’s then hunted by the parents of his victims and chased to the old boiler room where he used to target them.

The building is set alight with him inside and the story of Freddy Krueger on Elm Street begins. Today we’ll be covering both his looks from the old movies and the modern reboot, they both share similar elements however such as red and green turtleneck as well as claw gloves. 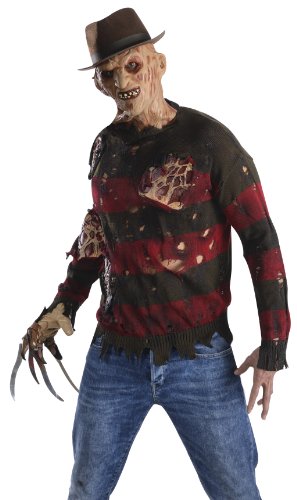 Looking for a quick Halloween outfit before we dive into the nitty gritty of do it yourself? Check out these two choices for men that are absolutely gruesome (but in a good way) and will give your neighbours a good fright. Both sets come with striped shirt and mask but check the description of each to see what else you’ll be getting. 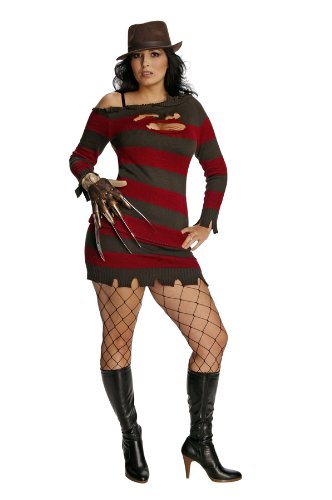 Despite the fact that Freddy is male his cosplay outfit is in high demand for women too and going by the amount of reviews on Amazon they’re even more popular surprisingly. His outfit can easily work for both men and women so there’s no problem there, and we can see that proven in these outfits available above.

The first look is from the original films by Wes Craven starring actor Robert Englund as Freddy however in the recent remake from 2010 Jackie Earl Haley takes on the infamous role. Just add knee high boots instead of ankle and a black trench coat if you’re going for the modern reboot instead. 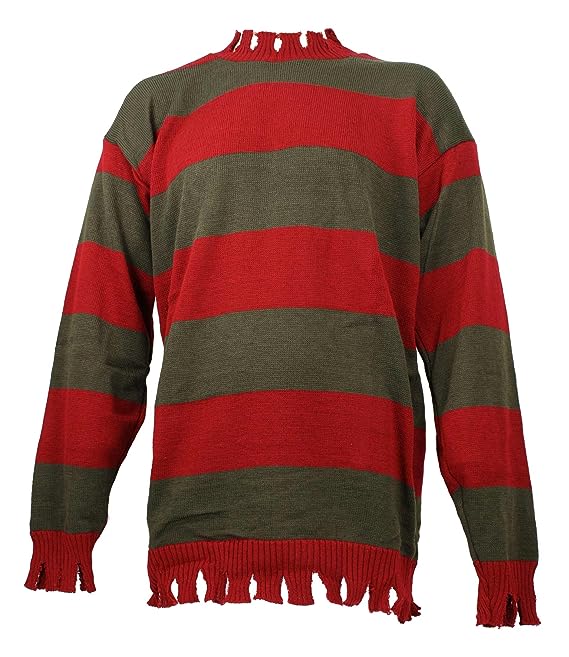 The item that people will recognize as Freddy Kruger’s is his red and green sweater, check out your local thrift stores such as Goodwill for a similar sweater and while you’re scouring the thrift store look out for black boots, black gloves for his talons and a brown fedora.

Despite the antics from all Nightmare movies Freddy’s sweater stays fairly clean and rip-free however if you want add a few tears and rips for a more rugged look. Above is a shirt you could use with tattered edges, paired with the makeup tutorial below pants, fedora and boots from the thrift store and you have yourself a cheap Halloween outfit.

Freddy’s brown fedora is crucial although there are many ways you can go about buying or creating your own, they can be expensive depending on which one you purchase to keep within budget another idea is to create your own using brown wool felt.

Check out online blogs and curation boards like Pinterest for good guides on how to do this in-depth. For now here’s the best premade fedora I could find online if you decide against creating your own.

You simply cannot be Freddy Krueger without his talon gloves, you can go with expensive metal gloves or rustic card and tin foil gloves using paper mache for strength for those on a budget or with strict time constraints.

Perhaps the most crucial part of Freddy’s look are his burn mark, adorning his face after angry parents gave him a taste of his own medicine. There are several ways you could go about recreating his burns however most require complicated use of latex.

A simpler way uses only drugstore makeup or pick up the supplies you need from a Halloween retailer closer to the time. Check out this quick five minute video that shows you just how to do that.

If the idea of makeup or latex doesn’t sound appealing to you then you could go as Freddy pre-burns, people would still recognize who you’re portraying by his red and green sweater, gloves and fedora. Alternatively wear a latex mask instead so all the work has already been done for you, check out the link to Amazon or search retailers like Ebay for more affordable options.

I’ll be adding more costume tutorials in the lead up to Halloween featuring iconic Halloween movie characters such as Scream, Chucky from Child’s Play and many more so keep any eye out.