Hiccup How to Train Your Dragon Costume

How to Train Your Dragon was another movie that proved that Dreamworks has what it takes to go up against undisputed champ of 3d animated family friendly movies Disney Pixar. Staring Hiccup as the main character who befriends local dragon Toothless.

Hiccup Horrendous Haddock (check out that alliteration) is the main protagonist of the series and the character we’ll be focusing on today. I’ll show you how to put together the various elements of a Hiccup costume including: fur coat, boots and Viking accessories.

Fast forward to the second movie however we see him wearing armour, brown arm braces and a mechanical prosthetic leg following a close battle with Red Death. It’s up to you which look to recreate but don’t worry we’ll cover both below in detail.

How to Train Your Dragon Hiccup Costume 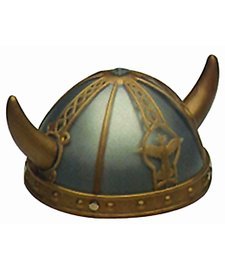 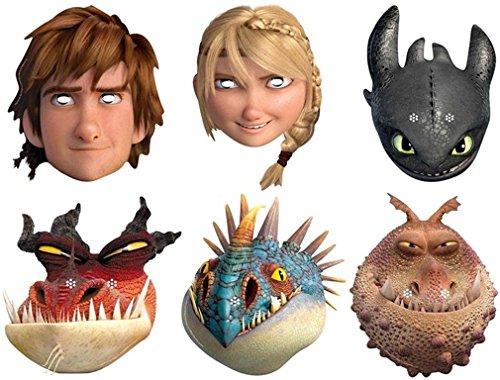 Multipack – 6 Official How to Train Your Dragon 2 Face Masks

Hiccup looks different depending on whether you’re going by Cressida Cowel or Dreamworks take on it, we see him age from a 15 year old teenage to a 20 year old adult. Rather scrawny and weak at the beginning with brown hair freckles and seen wearing a green tunic, fur coat and fur trimmed boots.

There isn’t an official costume based on the first movie so you’ll have to improvise by picking up a green tunic and brown felt to create his vest and pair it with both Viking helmet and Hiccup’s mask above.

How to Train Your Dragon 2 Hiccup Costume 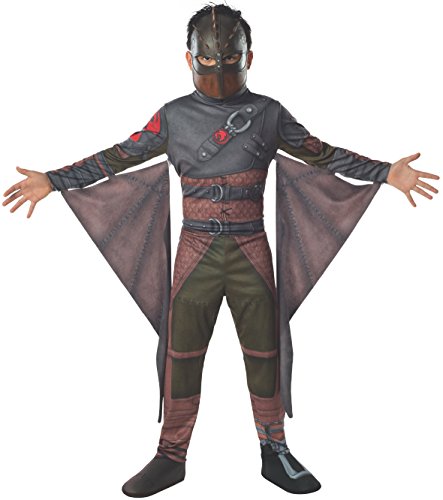 Rubies How to Train Your Dragon 2 Hiccup Costume, Child Small

How To Train Your Dragon Child Hiccup Costume

I’m a little disappointed by the choice of official costumes available for this character which is a great shame. The only ones available are based off the second movie and include: jumpsuit with boot tops, wings and mask. You have two retailers to choose from Amazon and Halloweencostumes.com just in case one goes out of stock during September and October.

What I like about this is it’s a simple 2d design printed onto a tunic rather than a 3d design which would be heavier and quite stuffy at that, and can easily slip over your existing outfit to keep you or your child warm.

The first item you’ll need to construct if you’re doing it yourself rather than buying a premade costume is his fur vest. Gather a suitable length and width of thick brown felt to fit you/your child’s body, cutting two holes on each side for your/their arms.

Create the belt using a scrap of leftover brown fabric or felt or wear a simple brown leather belt from the thrift store. Then you’ll need a simple green tunic, cut the neck down an inch and sew back up with twine or thick string for a rustic Viking finish.

For the boots start with a pair of regular brown or dark leather boots possibly from the thrift store or a pair you already own and begin sewing fur in the form of brown felt around the brim or use iron on Velcro to the same effect. Now add cream cargo boots and you’re ready to add your Viking accessories.

Finish off with Hiccup’s Viking accessories including helmet, shield and axe. All can be created with card, paper-mache and painted or you can gather all at your local dollar/thrift store.

Don’t forget Hiccup makes a great pairing to Astrid (check out her tutorial linked) as a couples costumes, or even siblings. For groups you have endless possibilities with each person dressed as a different How to Train Your Dragon character.