Finding Nemo was an animated comedy/drama family movie released in 2003. The movie totalled 936 million dollars in sales that year. It was referred to one of the best family moves of all times.

It was witty, funny and engaging, everyone loved it. It is based on the story of an over protective blow fish named Marlin and his wife Dory who set out on a quest to save their abducted son Nemo.

When Nemo was still an egg he his siblings, mother and father, were attacked by a barracuda who eats all the eggs but one. That egg became Nemo. One day while Nemo was on a field trip his dad Marlin embarrassed him and he snuck away from the reef and was captured by scuba divers.  Marlin and Dory travelled all the way to the Sydney Harbor on their mission to find his lost son. 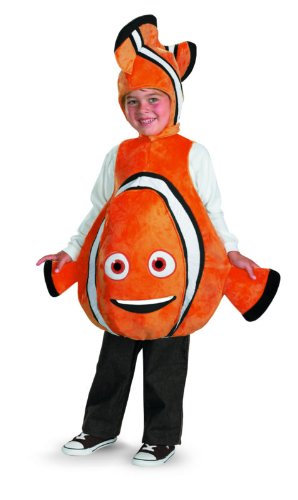 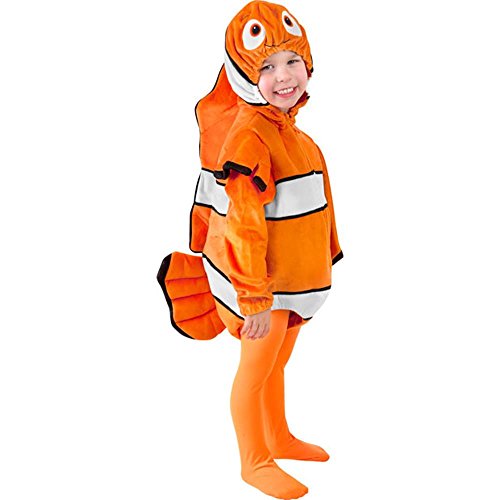 Check out the top picks for a premade finding Nemo costume before we get into the do it yourself instructions. Easy to pop on over your clothes for those in a rush and don’t want to mess with fabrics and sewing machines.

Two popular choices for children and toddlers over at Amazon that can be worn ‘as is’. If it gets chilly where you live in October remember to have your child wear a sweater underneath their outfit to also maximise comfort.

Don’t worry we haven’t forgotten adults, while there isn’t as many options for older fans of the film here’s an interesting option for women with a ‘naughty’ theme from Halloweencostumes.com, yes they can make anything into a ‘sexy’ costume nowadays.

Nemo’s captor, Sherman plans on giving him to his daughter who once killed a fish by constantly shaking its bag. Nemo will at all cost avoid being her pet, and Marlin and Dory will go to any lengths to find their beloved son.

The costume is perfect for boys and girls of young ages. Even parents can go as Marlin and Dory if they want to make a family event of it.

The first thing that you will need to do is lay out your two pieces of cardboard on a flat even surface. You will use the cardboard last.

Second get fish patterns from the internet and cut shapes out of the foam for the fins and the body of the fish. Lay out the fish cutouts and glue the newspaper to them. Then cut of the extra paper around the cutouts. Let this dry for about 45 minutes before you go to the next step. After the glue has dried, you then want to arrange your cutouts on the cardboard pieced together and glue them down.

Spray the whole piece with the toner. Let this dry for about an hour before you begin to spray paint your fish. After the entire piece has finished drying you will then want to spray paint your fish. Use your fist print outs from the internet as a guide. When you finish painting the pieces spray another coat of toner over the paint. You will then need to let this dry for another hour and a half.

While you are waiting for that piece to dry, repeat the steps for the other side of your costume. When done with both sides and they are dry, cut the extra remaining cardboard from around your fish. You now have your two pieces for both sides. The best way to hold the pieces on for the costume is to cut two slits in the middle of the fish sides and place the pieces on both sides and run your belt through the slits. You now have a costume that will look good and stand out at the party.

Now if you’re not good with crafts of this nature you might want to look into buying the costume. You can find them online or in the Halloween seasonal section of your local department stores. Either way you go you will have a great Halloween costume that your little one will love and enjoy.