How to Make a Minion Costume

The minions are back and they’re as funny and adorable as ever, taking centre stage in their own spin off movie of the same name. In courtesy to their new movie today I want to show you how to create your own do it yourself DIY Minion costume perfect for cosplay events, fancy dress and of course Halloween.

We were introduced to these obedient creatures way back in 2010 (seems like decades ago now) in the first Despicable Me film by Illumination Entertainment, it was a breakout hit for them which would ultimately spawn two sequels.

It stared Steve Carrel as Gru, the evil super villain of the series who wants to outdo fellow villain Vector who’s only gone and stolen the Great Pyramid of Giza and make him Mother proud at the same time. Gru has a light bulb moment and decides he must steal the moon with the help of his trusty yellow ‘minions’.

Kevin, Stuart and Bob are the three yellow creatures we are introduced to, all have very similar outfits with slight variations here and there which we’ll touch on below. However each has similar components such as:

All it takes it putting together these elements into one cohesive outfit so people recognize who you are. 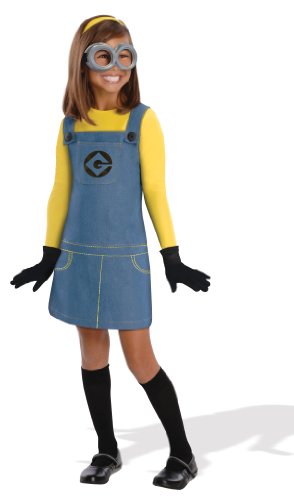 Who would have thought such little creatures could cause such a fuss, recently there was outrage at comments made by the creator stating ‘Seeing how dumb and stupid they often are, I just couldn’t imagine Minions being girls.’

This doesn’t mean we have to side with this view, in fact girl’s minion outfits are super popular too and here are two popular choices to choose from for children and adults. Simply finish off with your own footwear (black boots). 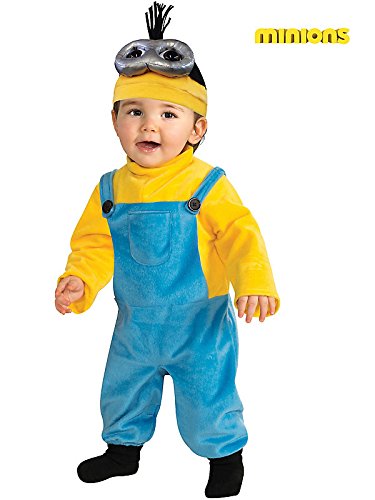 First up is Kevin, if this is your favorite character from the series then this is the section for you if not check out the other two below. Firstly we notice Kevin is slightly taller than Stuart and Bob therefore this is a great outfit for teenagers or adults accompanying children on Halloween.

All of the basic items apply such as blue overalls with Gru’s ‘G’ logo printed on, gloves, boots and a yellow turtleneck plus yellow face paint/mask. One unique feature of Kevin is his long gravity defying spiky hair.

One popular way of replicating this is by use of black pipe cleaners attached to a headband or swimcap, alternatively wear your natural hair and gel it up so it becomes spiky with a gravity defying property.

Next is goggles, now minions just wouldn’t be the same without them but each character has slightly different ones. For Kevin you want two eye holes. A final accessory for Kevin’s outfit is a cardboard sign with the words ‘I’m with stupid’ with two arrows pointing in either direction. Use tea/coffee stained cereal box card with the wording written with a black Sharpie pen or similar.

Next up is Stuart’s costume, I like to think of him as the middle child of the group (don’t ask why) so think this would be a perfect choice for middle children or fans of the character. As per usual start with the basic elements that all minions have such as overalls, gloves and boots.

Now Stuart has spiky hair like Kevin only this time it doesn’t have the same gravity defying effect and instead sits on his scalp. Create this hairstyle in the same way I discussed above however use gel to keep your natural hair down or secure your pipe cleaners in a different way with your swim cap to stop them popping up.

The key detail that differentiates Stuarts attire from the rest is his goggles, these only have one eye hole which are slightly more difficult to find/create yourself. One easy-peasy way to create a single lens goggles is by using a see-through canning jar lid as the lens and attaching that to your head with a black elastic band.

It’s not only his goggles that set him apart, but also a ukulele which he is seen holding throughout the series. You can find decorative ukuleles to use online or in your local thrift stores to keep down cost. It’s not a compulsory accessory so if you do include it don’t pay an arm and a leg for the privileged.

Last but not least is Bob, out of the three I’d consider him as the youngest child so this is an ideal choice for younger children or even babies depending on who’s dressing up in your group. It’s also the easiest outfit out of the three as it doesn’t include any special accessories and he doesn’t have any hair either.

While everything is the same for his look/outfit including: goggles (two lenses this time), yellow skin which can be created using face paints plus a yellow turtleneck/sweater, black gloves and boots. What really sets Bob apart is his hilarious confused facial expression. 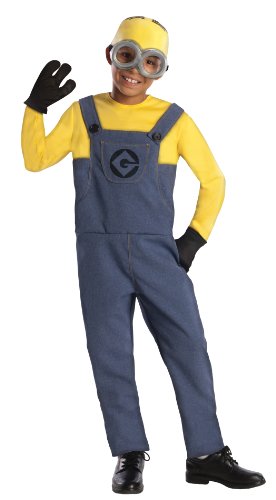 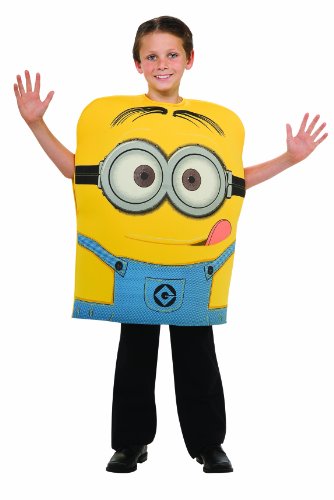 Let’s not forget Dave from the second movie: Despicable Me 2. Similar in appearance to Stuart with a similar hairstyle however instead of one goggle lens he has two. What sets Dave apart from this others is his extreme accident prone personality as well as being very excitable liking foods like cake and ice cream.

Here are two very different costumes for Dave. One is an outfit with jumpsuit, headpiece and goggles includes and the other is a tunic which can be pulled over your existing outfit. This will help provide warmth on cold Halloween nights but can be used indoors for playtime too after Halloween has ended. 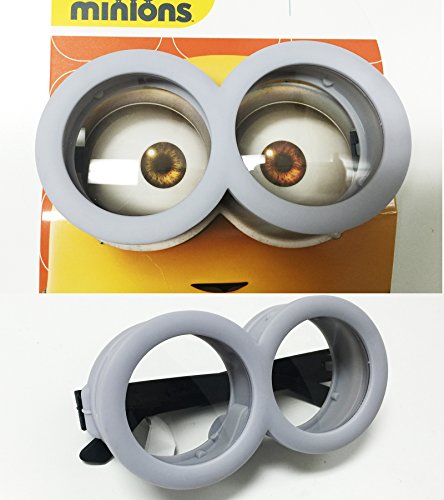 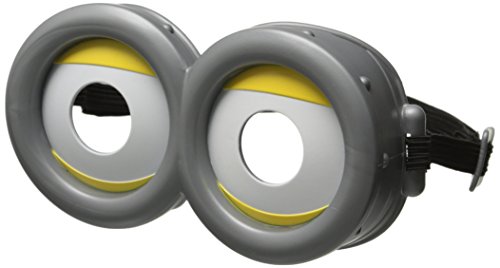 There are so many creative ways to create your own goggles for these despicable creatures that the list could go on forever, however here are the three best ways to go about it.

The first one is mentioned above and perfect for creating either Bob, Stuart or Kevin’s goggles as it’s up to you how many lenses you include. Get two silver mason jar lids with see-through centres, attach two together or use one if you need to using a hot glue gun then attach a black elastic band around both to go around your head.

Another option is to use free printables you find online, the design will be different for whichever character you choose whether that be Bob, Kevin, Stuart or even an evil purple minion. Print onto sturdy card or onto paper then stick onto card for added strength.

The final option is ready made goggles, considering the popularity of the series it used to be surprisingly difficult to find a simple pair of official minion’s goggles that reflect all three characters well. But with the new movie out Illuminations Entertainment bought out an official pair which you can check out above.

Another small but important element to each minion’s outfits is their master Gru’s ‘g’ logo printed onto the centre of their blue denim overalls. If you’re going off new spin off movie for 2015 then you don’t need to worry about this detail as the spin-off was set years before.

The easiest way to create this is using a combination of black and white felt (possibly left over from another cosplay), print off a guide of Gru’s path from the internet and use it as a stencil to cut out your own. Alternatively use appliqué fabric to simply iron onto your overalls straight away. Overalls are easy to find second hand from local thrift stores or online retailers.

Fast forward to 2015 and the minions are as popular as ever, who would have thought all the way back in 2010 that they would come this far and be as loved as they are now. Gru features but only as a child, were we see the first seeds of his villainous lifestyle emerge.

As I mentioned above this film is a spin off charting the Minions first ever evil master: Scarlet Overkill and her doting husband Herb Overkill. They’re at it again stealing things, this time Queen Elizabeth’s prized crown.

To say their new movie has been a success is an understatement grossing over $750million at the box office (at the time of writing) and provide as much comical moments as Despicable Me 1&2. It’s because of this that I believe Minion themed outfits and costumes will be super hot come Halloween so make sure you pre-order well in advance to avoid disappointment.

Don’t forget to check out our other tutorials for the Minions despicable masters including: Gru, Scarlet Overkill and her husband Herb Overkill. Perfect for those dressing as the characters from the newest spin off movie for 2015.