Game of Thrones outfits are popular around Halloween, everyone enjoys dressing up as characters from their favorite television shows and movies and as one of the top shows at the moment Game of Thrones is a hot choice.

Today I’ll be showing you how to put together a Ned Stark costume, perfect for both Halloween cosplay conventions.

Eddard Stark also known as Ned by close family and friends is a main characters from George R. R. Martin’s medieval epic on HBO and plays a big part in the first series as a patriarch and husband to Catelyn Stark.

Ned rules over Winterfell for seventeen long years until the King Robert’s hand dies and Ned has to take over making the long journey to the capital to regain his post. Things aren’t what they seem though and Ned learns a great deal about why the King’s hand was actually murdered. 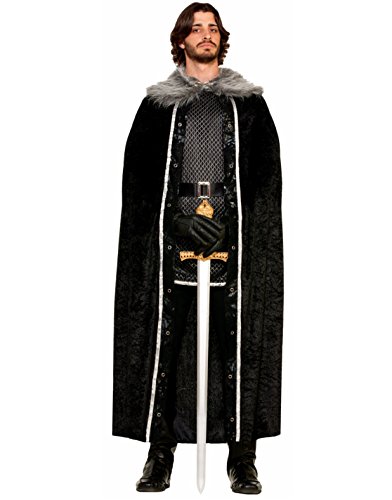 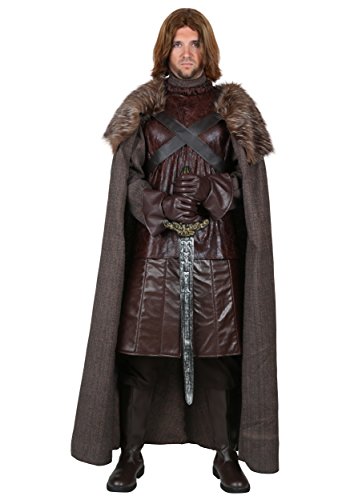 Enough about the character now onto how to create his outfit. There are several layers to his attire with a thick fur coat over it all and leather straps across his chest to keep it in place.

There are a few choices of Medieval themed outfits similar to Ned Stark’s online, chances are you’ll be hard pressed to find these offline in a brick and mortar retail store. The first one is a full length fur trimmed hooded black cape, other items shown are not included.

The next option is more screen accurate listed as a ‘North King Costume’ on Amazon but Ned Stark costume on other websites. This includes a brown tunic, cape and pair of gloves and looks closer to what you see on the small screen with visible leather straps going across the torso area. 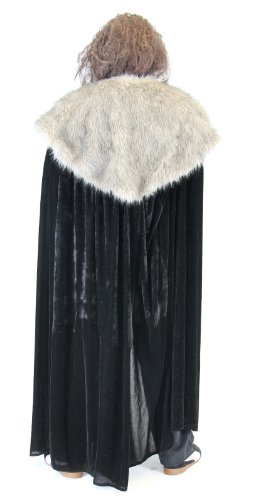 Here is another popular choice for the Game of Thrones character and can be used for a Jon Snow costume aswell as the two are extremely similar. It includes full length black cloak with detachable fur trim and two panther clasps. Add a wig, sword and pair of boot tops and you’re ready to go.

Boots tops are crucial because after all winter is coming and residents of Winterfell and the surrounding areas need heavy duty footwear to keep their feet warm, only with boot tops all you need is a pair of regular black shoes to pop them over and instantly transform into something from the Medieval era.

Unfortunately this set doesn’t include Ned’s leather straps across his torso area, however the panther clasps are a nice touch that makes it stand out. Use the reference image as a guide to what to wear underneath your cloak such as a silver chain mail shirt. 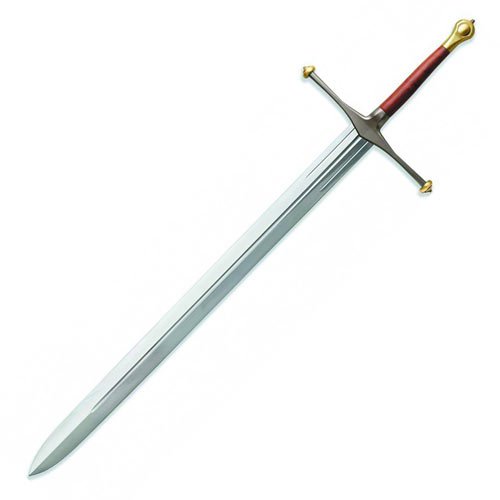 A man like Eddard needs a weapon on hand at all times due to his line of work, not that anyone else in Winterfell is safe.This sword replica is perfect to accompany his cloak with a display plaque and certificate of authenticity for when you’re finished using it.

Being a hand of the king is an important position for Stark’s family and a great honour at that, but with great honour comes great loss as Ned has to make a decision and leave his family for the King risking his life in the process.

Ned proudly displays his hand of king pin at all times on his chest, above is a replica you can use for your own outfit, only this one doesn’t come with the risks attached. I like this model the best as the detailing is superb with a distressed effect for authenticity.

When I first looked online for detailed information on this character’s outfit there was very little to say the least, I hope this article has rectified that and you can now celebrate Halloween this year dressed as your favorite Game of Thrones character. Keep an eye out for more Game of Thrones tutorials!