It’s been almost two months since I last blogged and this post is definitely overdue, with Star Wars Force Awakens  being the highest grossing and without a doubt the most popular movie of 2015 it was about time I did a guide outlining Rey Star Wars Costume.

Perfect for everyone wanting to dress as this character for cosplay conventions aswelll as Halloween of course.

Rey busted onto our screen big and small in 2015 portrayed by the talented Daisy Ridley as a kick-ass protagonist who becomes entangled in the resistance’s conflict with the First Order, here is where she meets her two companions Poe and Finn. 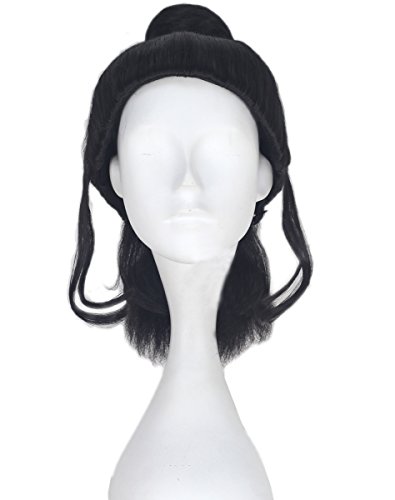 We show you how to create Rey’s hairstyle below, before we dive into that if your hair isn’t long enough or if you’d prefer a wig check out the option above. There are very few options for Rey’s wig at the minute so we’ll have to work with what we have until more come into stock.

Many people recommended using this wig as a substitute to low quality wigs you get with other premade cosplay sets. Comes with wig cap and adjustable for many different head sizes too!

To keep everything in a logical order we always start at the top of the outfit and work our way down, so the first step is creating Rey’s iconic three bun hairstyle (you’ll need shoulder length hair to pull this off). You could easily rock this day to day too and it wouldn’t be hard for people to tell what character you got the inspiration from.

This is super easy to pull off for even the most inexperienced hairstylist, so let’s get started. You’ll need one small hair elastic band and three larger ones aswell as some bobby pins. Comb out your hair so it’s easy to work with. Gather a small section of hair above your forehead, tie this with your small elastic band.

Now pick up the top third of the rest of your hair, smooth it out and tie it into a ponytail with your larger hair band but don’t pull the tail all the way through leave a loop of hair with the rest hanging down. Wrap this first tail around the bun using bobby pins to keep it in place (use the video as a guide). Then work on the second third of hair, making it into another ponytail and repeat the same process. Finally make one final bun with your remaining hair.

Rey is a huge role model for children around the world now, it’s rare that we see a character like her portrayed like this especially in recent times. No doubt these outfits will be popular all year round not just at Halloween.

Here are two of the most popular options for children.Comes with deluxe jumpsuit, attached sash, sleeves, cuff, and belt with pouch set. Add a pair of black boots and a wig and your child is set to go. You can also purchase this through Buycostume, make sure you check there before you commit to a purchase in case a deal is going on that Amazon doesn’t have.

It’s not only children that have been taken aback by the glory that is Star Wars Episode VII: Force Awakens, kids and adults alike have been flocking to movie theatres in droves, EVERYONE is obsessed.

I’ll continue to add new links and update this page as time goes on and add new outfits as they become available, at the time of writing this is the only option I could find. It’s comes with everything you’ll need except boots and wigs including: shirt, pants, sleeves, cuff, and belt and pouch set.

You could also put this outfit together from scratch yourself with a little do it yourself know how, a great project for the family too.

Start by creating the goggles, using a pair of regular blue colored goggled with rustic beige felt and fabric stuck onto them using a black marker to add detailing.

To create Rey’s dress begin with a white tank sprayed with brown and beige fabric paint to get the desired shade and cutting a V neck as a base and layer enough beige gauze fabric into the corresponding places using a reference image as a guide pinning and sewing as you go. Finish off with a leather brown belt to give your outfit shape and keep it in place.

We’re almost at the finishing line now just one more item to add to your attire and you’ll be ready to fight the First Order alongside Poe and Finn. Rey may be kick-ass all on her own but every movie hero needs a weapon and hers is a staff. Here’s an officially licensed accessory that comes in at four feet long and four inches diameter.

One thing to keep in mind, this doesn’t come with a strap to hold it over your shoulder like Rey does in the film however you could easily add a scarf or length of fabric to pull off a similar effect and add more detail.

I have no doubt in my mind that this costume will stay popular throughout the year (which is perfect for children’s dress up play) all the way to Halloween and perfect for cosplay conventions taking place all year round. Keep an eye out on the blog as I’ll be adding more Star Wars Force Awakens themed tutorials perfects for groups, friends and couples alike who want to dress as a group.