Oh the humble Rubik’s Cube (formerly named ‘Magic Cube’), a simple six-sided cuboid puzzle with millions of possible solutions that has bewildered and confused the masses since the early 80’s. The top selling puzzle game around and often considered as the top selling toy of all time too.

The basic premise is of a 3×3 cuboid with different colored faces (blue, red, yellow, orange, white, green), when the faces are mixed up it’s up to the user to return each side to the same color.

Today we’ll be looking at Rubix cube costumes for Halloween and fancy dress parties, from do it yourself instructions for an outfit in a few hours to premade costume for those in a rush. The best part is not many people will think of dressing as this iconic cube which means you’ll stand out and be unique. 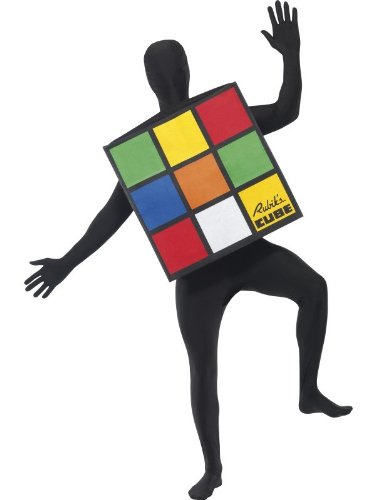 The choice of Rubik’s Cube costume is fairly limited even when you look online at specialist Halloween stores, here are a few choices from Amazon including sizes for adults and kids, aswell as men and women.These are 3d outfits that will add a special touch to your Halloween, just be careful not to bump into anyone. 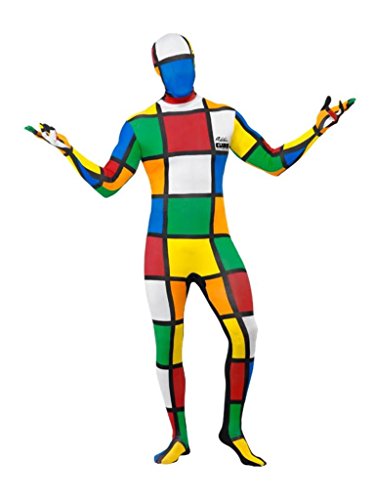 Another cool choice is this zentai second skin suit with multicolored squares to replicate the iconic Rubik’s Cube design. Wear a turtleneck or shirt underneath to keep warm during cold Halloween nights. 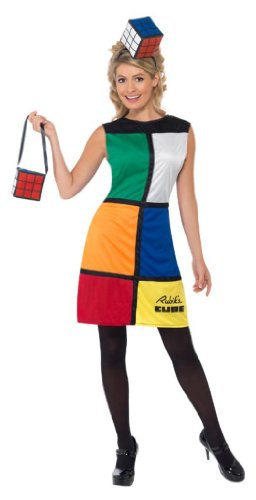 If the 3d outfits above are not to your liking check out this 2d tunic style outfit with Rubik’s Cube colors depicted on the front and back. Includes dress, headband and bag.

To create a fully functional Rubik’s cube costume with pivoted sides would be a complete nightmare if not impossible so instead you’ll be creating a cube outfit that simply appears as a Rubik’s cube but without any of the important functions.

First you’ll need to source a box in a suitable size for whoever is wearing it, for an adult you’ll need a larger box and for a child a smaller one. Once you’ve sourced the correct sized box move onto creating the black borders with either a black marker or black tape, measure each side beforehand so everything is the same length.

Now add the colors using different colored markers or paints for each of the six sides, these include: blue, red, yellow, orange, white, green. If you like begin with a base of white paint so brighter colors show better and optionally add paper mache for strength. Finally add a hole on the top and bottom of the box for the wearers head and body to go through.